The Official Recap Of Everything Haute Couture Week 2023 So Far!

The first two days of Paris Haute Couture Week has kicked in giving us a major fashion overload. And while we are only half way through, each show has been worth talking. The first two out of four days already gave us a good hint at the future forecast. Released completely from the shackles of the remembrance of the pandemic, haute couture week did not disappoint hosting their guests this year. These invite only presentations had a star studded guest list including Kylie Jenner, Doja Cat and Yara Shahidi. Designer brands like Iris Van Herpen, Giambattista Valli, and Armani Prive previewed their collections leaving the viewers with something to gravel over. From Naomi Campbell wearing a wolf coat at Schiaparelli to perfected artistry at Alexandre Vauthier. This is the official recap of 2023 Haute Couture Week – Day 1 & Day 2.

1. Schiaparelli Kicks Off The Week

Its 10am in Paris and guests are awaiting patiently for the first of SS23 Haute Couture show of the year. Daniel Roseberry, creative director of Schiaparelli, opens up with what seems to be an eerie presentation. Controversy surrounded his collection this year by many onlookers critiquing the adornment of large animal heads. Every few looks were accompanied by a fake, life size lion, tiger or wolf head. In fact, Naomi Campbell graced his runway in a black, floor length wolf coat. Kylie Jenner wore one of the pieces that was being previewed on the runway in real time. While it is common for designers to allow celebrities to wear certain garments before public release, people thought there was controversy surrounding that too.

All in all, this collection was nothing short of immaculate. He proudly proclaimed his inspiration stemming from a poem book titled Inferno. He takes us on a yingyang journey stating, “It is a reminder that there is no such thing as heaven without hell; there is no joy without sorrow[…]. A collection infused with oversized shoulder pads, exquisite tailoring and signature gold accents. This is a collection for the elegant women who isn’t afraid to handle powerful silhouettes.

As the theme for the MET Gala 2023, Chanel is one of the most loved luxury brands. While haute couture is an acquired taste, we know what to expect when it comes to Chanel. Over the years, many have expressed their disappointment with the creativity from the brand. Chanel will always cater to their core audience. That being of affluent, preppy women. However, not innovating their status quo has run the millennials of the fashion world amuck. Most of the critique stemming from them, the demand for a modernize Chanel is growing.

Moreover, the collection inspiration started at Gabrielle Chanel’s apartment, rue Cambon and landed between that and parades. Animals also had a large part in the collection’s direction. The show set included giant cardboard animals that moved and garments included motifs of birds, bunnies and corgis. The color story focused mainly on creams and blacks but had a few moments where color was prominent. Regardless, Chanel is always eluding sophistication and certified regal aura.

These two brands are in the forefront for the resurgence of the 80s aesthetics. Known for his use of sequins, Alexandre Vauthier did not disappoint. The collection had a fair share of hooded, sequin jumpsuits, pastel shades and powerful blazers. The use of sequins was skillfully presented in cutout panels and shoe accessories. The play on the scale size of bows and flowers were showcased on both Gaimbattista and Alexandre runways. Whether in the form of a shaw or an accent on a dress, these trends were a prominent fixture. Not too mention the heavy use of drapery. One can only think the resurgence of 80s culture could be approaching its peak.

Similar to Vauthier, Giambattista’s color story included bright shades of pinks, yellows and greens. Both brands did not shy away from pairing two dramatic elements while maintaining high fashion. As red carpet season approaches, we are positive celebrity stylists’ are negotiating heavy for these looks. 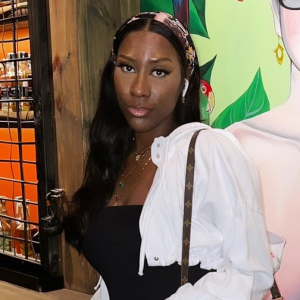 Grammy News: Cardi B wears a blue gown designed by Gaurav Gupta from his spring 2023 collection